[the_ad id=”20″]There has been an ongoing discussion in the photography and videography communities for years now regarding carbon fiber and aluminum tripods with people trying to put their point across that one type is universally better than the other. As we have seen a number of people reaching out for a dedicated article going over a comparison on carbon fiber vs aluminum tripods we have decided to make this the topic of today’s article and share out thoughts on it.

We are hoping that our article will help any of our readers who are looking to add a new tripod to their collection and hopefully offer some advice on the best option for you. We see an absolute ton of tripod-based questions across the board so we feel that it is pretty safe to say that a number of our readers are likely to be in this situation and may find value in our article.

Now, in all honesty, there really is not a straight answer to this as each type of tripod has its own advantages and disadvantages over the other with the best option coming down to your own personal circumstances more than anything else. For example, a decent, professional level carbon fiber tripod is usually seen as more of an investment that can potentially last you decades whereas a decent aluminum tripod can often be seen as more of a cost/consumable as it will probably need to be replaced every three to five years at best due to structural fatigue.

The most common situation that comes into play when deciding if you should be going with carbon fiber or aluminum is the level of photography or videography that you will be getting involved in. If you are working at a professional level and plan to be doing for over many years, at the time of writing, carbon fiber is almost always going to be a much better option. That said though, if you are more of a hobbyist photographer or if you just want to try your hand at photography or videography then the lower price tag of the aluminum variants can often be the better option.

Additionally, on top of this, so much more comes into play when deciding on your tripod. For example, a high end tripod like the aluminum Manfrotto MT055CXPRO3 is a much better option than a low end tripod like the carbon fiber Zomei z699c even though it is made from aluminum. You can then add in the carbon fiber version of the Manfrotto MT055CXPRO3 and it blows the aluminum version out the water for any professional level photographer or videographer.

We just wanted to get those key points out of the way early in the article rather than waste any of our reader’s time who are in a hurry by having you read the full article only to make these points at the end. We feel that a large number of our readers, you will likely be able to make their minds up based on the information above and taking their own personal circumstances into account. For those of you who like to know as much as possible before making a decision, we will be taking a more in-depth look at the differences between aluminum and carbon fiber tripods below. 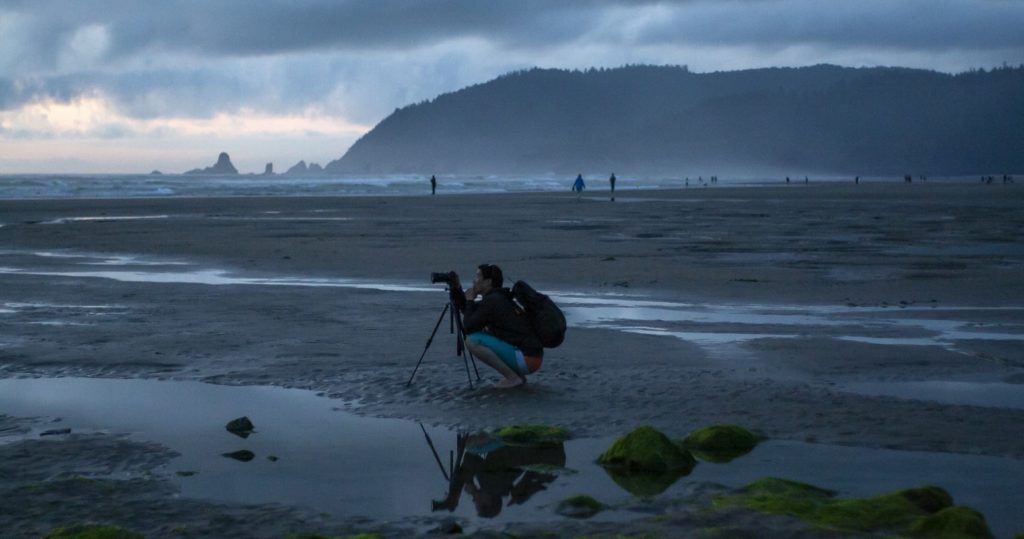 As we mentioned above, a large number of tripod brands will release a carbon fiber and aluminum variant of the exact same tripod design so let’s take a quick look at a real-life example. In our opinion, the Manfrotto MT055CXPRO3 is one of the best tripods ever made for both photography and videography. When you factor in the performance, functionality, and image stabilization that you actually get for the price the tripod is in a league of its own against the competition. Now, when it comes to the actual build quality differences of aluminum vs carbon fiber, much of the difference in price actually comes down to the engineering standard rather than the actual properties of the material. Not only are Aluminum alloys cheaper and easier to source but large parts of the production process can also be automated to help keep costs as low as possible. When it comes to carbon fiber, the opposite is true and creating a carbon fiber tripod can take many hours of hands-on work to get it to the same standard of an automated aluminum tripod.

If you are in a photography, videography, or vlogging niche where you need to travel around by plane on a regular basis, are definatley the way to go. They tend to be smaller to their aluminum counterparts while also being much lighter while also being much tougher at the same time. Not only does this give you peace of mind that a carbon fiber tripod can easily take the bumps coming its way during use and while in transit but the lighter weight also makes it easier to pack it without going over your airline luggage restrictions.

Another area where carbon fiber blows aluminum out the water is that it is much easier to adjust different areas of the same unit to have different strengths and pressure points without having to increase the size and weight of that area. This allows tripod manufacturers to easily add additional strength to any potential weak points or load-bearing areas of the tripod without having to increase the weight by too much when using carbon fiber.

That said though, new technologies based around hydroforming the aluminum prior to casing the tripod can offer these same advantages. At the time of writing, the process is extremely expensive and would make the aluminum tripod cost more than the carbon fiber counterpart while still having the heavier weight of the aluminum making it pointless.

As we touched on back at the start of the article, many photographers and videographers will put their camera accessory purchases into one of three groups. These are costs, consumables, and investments and just like many popular camera accessories, a tripod can actually fit into two groups depending on the material it is made from.

Carbon fiber has no shelf life determined by natural corrosion and can essentially last for decades while providing you with the same levels of support and image stabilization as the tripod did back when first purchased. Due to this, a professional level carbon fiber tripod will fit into the investment category of your purchases due to a single purchase potentially lasting you your whole career.

On the flip side of this, aluminum does fatigue over time and contrary to popular belief it does corrode essentially putting a shelf life on even the best professional-level aluminum tripods. Depending on the engineering quality of your aluminum tripod you can expect a warranty to cover the tripod for a shelf life of three to five years at best. As a photography or videography career can easily last much longer than this, an aluminum tripod will usually fit into the consumables category of your purchases and potentially need to be replaced every few years.

Now, we just want to quickly touch on the corrosion of aluminum tripods as even today, many people still think that the structural integrity of aluminum does not corrode over time from the elements but this is not true. Rather than showing more obvious signs of corrosion like rust for any steel products, aluminum produces a white dust like substance. If the substance is very fine with a consistency of cooking flour then the aluminum has years of life left in it but the closer the consistency becomes to sugar with actual grains being products the shorter the shelf life your tripod has left. If your aluminum tripod is starting to produce this substance with a sugar-like consistency then we would highly recommend that you upgrade in a new tripod as it’s not worth risking potentially thousands of dollars worth of camera gear on a potentially compromised tripod.

Moving onto actual damage and how each material reacts as well as how easy they are to correct. If your tripod takes a heavy bump then carbon fiber will simply crack with the benefit of the crack only extending along the individual damaged piece of your tripod. This can potentially make repairs much easier as you can often just do a one for one swap with the damaged component and replace it and your tripod is good to go again.

If an aluminum tripod takes a strong bump then it will usually dent or in more extreme cases bend. Depending on the part of your tripod where the damage occurs this can end up ruining more than one part of your tripod at once. For example, say your tripod is in your photography bag collapsed and a leg has something heavy land on it. Due to aluminum tending to bend rather than absorb the shock and crack, all of your extendable leg components may be bent and need replacing rather than just the main outer one that took the initial impact.

Another thing that we touched on earlier in the article is that the actual engineering process for a tripod also comes into play when trying to work out if aluminum or carbon fiber is the correct option for you. As we mentioned earlier, a high quality, well-engineered aluminum tripod like the aluminum Manfrotto MT055CXPRO3 absolutely blows an entry-level, cheap carbon fiber tripod like the Zomei z699c out the water.

Although the Zomei z699c is a solid little tripod that actually outperforms large portions of its competition, it doesn’t even come close to the performance of the aluminum variant of the MT055CXPRO3 that has been designed for professional-level photographers and videographers. Unfortunately, there is no easy way to know the level of engineering quality on a tripod as the marketing departments for tripod brands will often use buzz words and phrases like “engineered to the highest possible standards”.

Although it is not a perfect measure, price is often one of the easiest ways to tell and chances are then a large number of carbon fiber tripods that cost less than an aluminum tripod will be lower quality and have a lower engineering standard. If you are planning to use this approach, just keep in mind that the actual feature list of the tripod comes into play on price too. For example, flip locks for a tripod’s legs usually cost more than twist locks due to the locking mechanism and the additional security once locked.

That brings our article going over our carbon fiber vs aluminum tripod comparison to an end. We know that we have not been able to give an exact answer but as we have mentioned and tried to explain, both materials are better for people in different situations. As a rule of thumb though, if you plan to be working in the photography or videography field for five years or more, going with a professional level carbon fiber tripod will almost always be the better option.