[the_ad id=”20″]Each month we see a steady stream of people on social media and niche related forums reaching out to ask for advice on how they should be cleaning their gimbal and every month we see people offering useless and potentially dangerous advice. Thankfully, more and more people are becoming knowledgable on how they can best clean their gimbal if it ends up getting dirty and a few people each month do post some useful advice to those reaching out for assistance.

That said, we have decided to publish this post in an attempt to help any of our readers who are looking to clean their gimbal as quickly and easily as possible. Additionally, we also want to do our best to dispell some of the myths of how to clean your gimbal that has been handed down over the years as well as try to stop some common advice that we see that can potentially damage your gimbal too.

Before getting into the article, we just want to point out that we do not recommend that you strip clean your gimbal! We have lost count of the number of people who were overconfident and thought that they could successfully take their gimbal to pieces, clean it, and then put it back together again. The online communities for gimbal users be it drone-based gimbals, 3 axis handheld gimbals, or wearable gimbals see at least one post per month of someone who tried this and ended up breaking their gimbal, it’s just not worth it!

Is There Any Point In Lubricating My Gimbals Ball Bearings?

Lubricating your gimbal is one of those things that have been handed down over the years but due to advancements in technology, it is essentially pointless for all modern gimbal stabilizers. Although the people who parrot this information today have good intentions, it is often due to them seeing other people advising that you lubricate your gimbal and simply passing the information on without having the knowledge to know that it is pointless.

What Is A Sealed Ball Bearing System?

Now, sealed ball bearing systems offer a number of benefits to both you and the gimbal manufacturer. Firstly, it keeps the ball bearings that your gimbal uses to provide image stabilization for your camera rig in a sealed environment. Not only does this prevent dirt getting to them and having a negative effect on their performance but it also means that the manufacturer can use one of a number of high-cost lubricants in the ball bearing housing to ensure that they are always lubricated.

Additionally, it benefits the manufacturers of the gimbals as it helps to negate the need to regular maintenance of the gimbal meaning there are fewer people breaking their gimbals when doing maintenance and trying to return them in the warranty period. Additionally, it also enables the manufacturers to know for a fact that the ball bearings used on the gimbal will always have access to the highest quality lubricant available as it never gets changed.

This allows them to push the gimbal further without risking damage to it due to no maintenance being carried out by the user. Although other factors come into play, this is one of the reasons that gimbals saw a sudden increase in payload support around the time manufacturers switched over the sealed ball bearing system.

So What Does Lubricating A Modern Gimbals Ball Bearings Do?

In reality, nothing, they are in a sealed environment and the lubrication that you apply to their housing does not actually get to the ball bearings. That said though, the lubrication is not a total waste of money, some of the cheaper gimbal stabilizer brands do not have the budgets available to them that brands like DJI, Zhiyun, and even Feiyutech have so you are able to put a small amount of lubrication on areas where friction may commonly occur during use.

Should You Use Compressed Air? This is another recommendation that has been handed down over the years and although one time it was commonplace to use compressed air on your gimbal to help free and move dirt that you are unable to reach, it can now actually be potentially harmful. As gimbals have become more and more advanced over the years, more and more circuit boards have been added to them and many people still seem to use general-purpose compressed air to clean their gimbals.

General-purpose compressed air can actually build up a static charge when used and if this charge dissipates into the circuitry of your gimbal it can end up causing long term damage. Unlike something like a computer that is plugged into the mains and earthed via the power outlet to safely discharge the static, your gimbal will usually not have any way to safely dissipate the build-up of the static electricity until it eventually dissipated into the circuitry.

Additionally, most of the USB/Micro USB charging cables that some gimbals use are not earthed! This is common with USB cables as their primary job was initially to transmit data rather than charge a device. We just wanted to point this out in case any of our readers are thinking they are able to ground their gimbal via a USB charging cable.

Although there are a few compressed air canned products marketed as being electronic friendly, it is often just done for marketing and no real research has been done to our knowledge to back it up. That is why many people who have to maintain technical equipment on a regular basis will use something like a electric high-pressure air duster (Click here to check for product prices and availability).

Although they are generally safer than using the can base air dusters as there is no thread of a static build-up, any kind of blowing motion can present an additional problem, dirt ended up further in the gimbal to a sensitive area. This is surprisingly common and although it is unlikely to permanently break your gimbal, there is a good chance that it can have an effect on performance.

So What Should You Do? 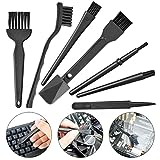 Until a few years ago, using a cheap anti-static brush (Click here to check for product prices and availability) was considered a total waste of time. That was until more and more people were reporting online that using canned air duster had damaged their gimbal. With some handheld gimbal stabilizers now costing as much as $700 per unit, it is no surprise that more and more people are starting to use the anti-static brush approach.

In addition to eliminating the thread of a static charge, the brushes also help you control what you are doing with dirt on your gimbal in those hard to reach places. Whereas the modern electric high-pressure air duster units can only push the dirt away from their nozzle, using a brush lets you get alongside it and then manipulate it out of your gimbal in the best direction possible. This also helps you prevent dirt from falling deeper into your gimbal and ending up in any sensitive areas where it can become a problem in the future.