Due to it not being a waterproof device, it quickly breaks when underwater and when people try to return it but the water detectors who that the device is broken due to water damage so GoPro don’t replace it. The people then go online and spout a bunch of crap about the Karma Grip that leads more people to presume that it is a waterproof device when it is not.

The Official Word From GoPro

The Karma Grip is totally splash proof so it will work great on power days and in the rain! Just don’t take it underwater! 🏊

As we said, GoPro has never actually claimed that the Karma Grip is a waterproof device and it even clearly states that on the official sales pages. That said, due to it being such a common misconception, there are a number of instances like the one above where people have asked them on platforms like Twitter and they have reiterated the point.

Although Splashproof is a little ambiguous and can actually have a different legal definition when it comes to marketing in different countries. In the USA, it tends to mean that the device has a rating of IPx4 and we were, unfortunately, unable to find any official confirmation of the official IP rating of the Karma Grip.

Breaking the IPx4 rating down means that it has an IP (Ingress Protection) of x (the first digit refers to dust ingress rating so X could be any as we are focusing on water) 4 (the second digit is the water ingress rating and 4 is usually “Splashing of water”). Modern waterproofing is usually considered to be IPx7 but the device would only be protected to a depth of 1 meter. You can read more about ingress protection ratings here if you like. 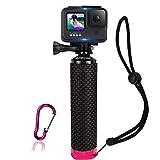 Well, the unfortunate fact is that we simply don’t have the technology available at the time of writing to create fully waterproof gimbals yet. We have absolutely no doubt in our mind that GoPro will probably be the first brand to get there but it is a few years off at best right now.

The closest alternative that we can think of is essentially just a waterproof handgrip that will give you something to hold in your hand and aim your GoPro efficiently while underwater. It offers no additional image stabilization but at the time of writing, is probably your best option.

Wrapping It All Up

That wraps up our article on the GoPro karma grip being waterproof. We know that there was not much to go into for the article as even though it is something that we see asked a fair amount while a little Google search can easily answer the question for you.