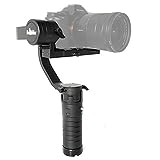 Welcome to our ultimate Beholder DS1 review that we have decided to publish after seeing a number of people asking for a dedicated review of the gimbal for a number of months now. Our hope is that this article will help inform any of our readers who are considering adding the Beholder DS1 to their collection of camera accessories as well as share both the good points and bad points of the gimbal.

Now, it is no secret that the DS1 failed to take off and grow a sizable customer base within the community over the years since its launch. Additionally, the gimbal has a rocky reputation at best within the community due to it having a number of issues that have held it back. On top of this, the Beholder DS1 is also a few years old now and it has not aged well against what the competing brands are producing.

Even back when it was initially released onto the market, the Beholder DS1 had sub-par specifications in our opinion, especially for its price point in the market so it is no surprise that the gimbal never really took over. Additionally, the gimbal has not received any real price reductions over the years to make it a more attractive purchase for anyone looking to add a gimbal to their collection of camera accessories.

Not only does a newer gimbal like the Zhiyun Weebill Lab absolutely blow the Beholder DS1 out the water when it comes to performance but it is also more than $100 cheaper than the DS1 at the time of writing. Additionally, the Weebill Lab also offers double the maximum battery life of the DS1 as well as almost double the maximum load capacity too along with an excellent reputation within the community.

This is why we would always recommend that our readers choose a gimbal like the Weebill Lab over the Beholder DS1. You are getting much better bang for your buck and overall, there really is no competition between the gimbals, the DS1 just has too many issues, poor specifications, and a price tag that is far too high for what you get.

That said, we will still be going over our review of the Beholder DS1 to go over why we feel this way and hopefully prevent at least some of our readers from essentially wasting their hard-earned cash on this gimbal. Additionally, if you need to use a long or heavy lens with the Beholder DS1 it can be a pain to balance and the quality of the image stabilization that it is able to provide for you really starts to suffer. This has a direct impact on the level of image quality that the gimbal is able to provide for you and if you are doing any type of paid client work can end up having an effect on your reputation as a videographer.

The recharge time for the gimbal also has similar reports with the average recharge time seeming to be around the four-hour mark. In this day and age, for this price point, you really are well within your rights to expect more from your gimbal when it comes to battery life. Again, the Zhiyun Weebill Lab offers a maximum battery life of sixteen hours with a recharge time of only three hours while also being cheaper than the Beholder DS1!

You can also take the flagship of the DJI gimbal range at the time of writing too, the Ronin S. Although it does cost a little more than the Beholder DS1, it also offers almost double the maximum load capacity with a much more reliable battery as well as some of the best image stabilization that we have ever seen.

The sample footage in the embedded video above was recorded using the Beholder DS1 and as you can see, the image stabilization is shaky at best and far from ideal for use if you are a professional level videographer with paying clients. The balancing algorithm and gimbal motors simply can’t get the job done and the gimbal is not worth its price tag, especially in this day and age where the Beholder DS1 is two generations behind the latest gimbals from the competing brands that outperform it and are often cheaper.

Although we have not experienced this ourselves, we have also seen reports from other videographers saying that their microphones were able to pick up the sound of the gimbal motors adjusting the load resulting in a contaminated audio track. Although this can be quickly cleared up in post-production, the point is that it shouldn’t have to be, especially when you are spending over $400 on the gimbal.

On top of this, the Beholder DS1 also beeps when you change gimbal mode for some reason. Again, this is something that will contaminate your audio track but the pitch of the beep is harder to edit out in post-production making it a total pain and to our knowledge, there is no way to turn this beep off.

Now, we know that we are sounding overly negative on the Beholder DS1 but you can read a number of third-party, independent reviews of the gimbal here and see that they are full of complaints. Trust us and the other videographers posting those reviews, go with the latest gimbal from either Zhiyun or DJI and save yourself the hassle of the DS1. Now, unlike the vast majority of other modern handheld gimbal stabilizers on the market right now that use a basic control interface on the actual gimbal backed up by a smartphone app, the Beholder DS1 has most of its customizable settings locked behind their software shown in the image above. This can be a total pain as throughout a regular videography session you will have to tweak your gimbal settings multiple times, especially if you are using multiple camera rigs with different payload weights.

This is just another reason that the Beholder DS1 failed in our opinion and why the competition essentially dominated the DS1s potential customer base. Although the software does get the job and is pretty easy to use, it does have some connectivity issues with it even failing to connect to the Beholder DS1 in the official video guide on the official YouTube channel.

As time is money for a videographer and every second spent having to tweak settings, especially in a long drawn out process like this is time not spent looking for footage to keep your clients happy, it is no surprise that videographers have so many complaints about the DS1. With the low sales and poor reputation of the gimbal, we doubt that much time or effort will be put into making a better interface system either so our advice would be just to avoid the DS1 all togeather.

Although the Beholder DS1 does have a smartphone app available for it, at the time of writing, it is Android only and has very limited functionality compared to the smartphone app for the DJI gimbal range. Additionally, we have seen a number of android users say that the app has a number of connectivity issues and often will just not connect to the gimbal at all.

This is just another nail in the coffin in our opinion that has prevented the Beholder DS1 from establishing itself within the videography community. Although until around a year back, it was commonplace for gimbal apps to be poor and not work well, this has changed with more and more brands investing in their smartphone apps after seeing how popular the DJI app has become.

Again, due to the poor reputation of the Beholder DS1 and its low sales, we doubt that much time or effort will be put into the DS1s smartphone app anytime soon meaning the connectivity issues will remain and there will be no app available for iOS users either. The design of the Beholder DS1 is pretty solid and in all fairness pretty much just follows the same or at least very similar basic design as the majority of other modern 3 axis gimbal stabilizers on the market right now. One thing that could definatley have been done better with the DS1 is to have more clearance at the back of the camera when seated in the gimbal. This would allow you to have your monitor open and visible as well as allow you quick and easy access to the various settings on the camera too.

Although this may sound like a pretty basic little thing if this is your gimbal, it really can make a ton of difference when it comes to your quality of life when using a gimbal and the image quality it can help you capture. Something so simple and basic should be thought of in the design stages of a gimbal and we are surprised that this problem has managed to make it through testing and into the live version of the gimbal.

Additionally, the Beholder DS1 can be a pain to balance, especially if you are using a larger or longer lens on your camera of choice. Additionally, if you use a multi-camera setup and plan to hot-swap between your cameras then this problem only gets worse as the gimbal head can vibrate pretty easily if the gimbal is not balanced for the payload of the camera in use. Something like the DJI Ronin S has its auto-adjust balancing feature where it will try its best to balance camera payloads that are of similar weight but there is no similar feature available on the DS1.

The build quality of the gimbal is pretty solid and ensures that the DS1 is both robust and lightweight ensuring that it will be able to stand the test of time. Unfortunately though, in our opinion at least, this is just too little too late. With a gimbal, the main thing you care about is the image stabilization and the DS1 just falls short and a solid build quality is just overshadowed, especially with the gimbal being so over priced too.

Question – What mounting thread size does the Beholder DS1 use?

Question – Does the Beholder DS1 have a minimum load capacity?

Answer – Yes, the gimbal has a 1.65 pound minimum load capacity meaning you will not be able to use smartphones, action cameras, and most point and shoot cameras with it.

Question – Will the Beholder DS1 work with my camera setup?

Answer – This is the most commonly asked type of question that we see when people ask about gimbals. This totally depends on the dimensions of your camera and the total payload weight of your camera setup. Provided it is between the minimum and maximum load capacity of the Beholder DS1 it should be able to provide you with some image stabilization.

That brings our Beholder DS1 review to an end and as you can probably guess from what we have said in the rest of the article, we would not recommend that our readers add the DS1 to their collection of camera accessories. In our opinion, something like the Zhiyun Weebill Lab or the DJI Ronin Sis a much better option and is well worth choosing over the DS1.

They provide you with a much better level of performance with flawless image stabilization while also offering you much more bang for your buck. Both also have outstanding reputations within the videography community and should be seriously considered in place of the Beholder DS1.