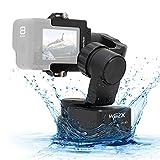 Today we are going to be going over our ultimate Feiyutech WG2 review that we have been meaning to publish for a few weeks now but have been so busy we simply have not had the free time to type the article up. Now, the WG2 has been designed to be a mid ranges gimbal stabilizer for the wearable gimbal market and is popular with a number of extreme sports enthusiasts. In particular, the downhill mountain biking and winter sports communities seem to be big fans fo the WG2 in particular and it has a pretty solid reputation within the community at the time of writing.

Now, we have had feedback from some of our previous reviews regarding formatting so we are going to try something new for this article and essentially post our conclusion first and then go into the review of the Feiyutech WG2 for anyone who wants to read it. This is due to feeling that the Evo SS is a much better wearable gimbal than the Feiyutech WG2 and we would recommend it over the WG2 to our readers. We just don’t want you reading the full article only to get to the end for us to say take the Evo SS instead so we wanted to get this out of the way early.

Now only is the Evo SS cheaper than the Feiyutech WG2, it offers better performance, increased functionality, and in our opinion, it is much easier to use. Additionally, at the time of writing at least, the Evo SS has the best reputation of all wearable gimbals within the community and it just keeps getting more and more popular.

To be clear, this does not mean that the Feiyutech WG2 is a bad gimbal, it actually offers some solid performance in all fairness to it but we just feel that it is overpriced for what you are actually getting, especially when you compare it to the cheaper Evo SS and what you get for your money there. If Feiyutech reduces the prices of the WG2 to around the $100-$125 mark we feel it will do much better within the community. At the time of writing, it is closer to the $170 mark but you can click here to check for current prices as we do expect a price reduction to soon to keep the gimbal competitive. So without any further ado, let’s get on with our Feiyu WG2 review. The actual image stabilization technology on the gimbal is great too, and in all fairness, to Feiyutech they have done an excellent job of improving their balancing algorithm compared to older generations of their wearable gimbal range. The image stabilization is quick and snappy making it ideal for fast-paced action sports that are bumpy and throw you around. The gimbal motors work perfectly with the algorithm too ensuring that the gimbal corrects the position of your camera to get you the smoothest possible video footage.

Speaking of the gimbal motors on the Feiyutech WG2, they are pretty power-hungry and with the lower capacity battery in the gimbal, it can only manage a maximum battery life of around 2.5 hours per charge. This is exactly half of what our primary gimbal recommendation, the Evo SS offers with its five-hour maximum battery life per charge and in addition to the higher price of the WG2 is the main reason why we would recommend the Evo SS over the WG2 for our readers.

When it comes to recharging the WG2, we have seen a number of reports with widely ranging recharging times starting from around the three-hour mark going to up the five-hour mark. The average does seem to be closer to the three-hour side of things and you also have to take into consideration that not all countries use the same power grid and output powers levels too.

The sample video footage in the video above offers a great example of the type of video footage that you can expect from the Feiyutech WG2 during use. You can see that the video footage is smooth and the image stabilization is snappy and very quick to adjust the 3 axis gimbal head to offer you the best quality possible for your sport of choice.

If you are wanting to record your video footage to upload it to a site like YouTube then this improvement to your image quality can really help you stand out against the competition and help get your channel some traction. Although the latest GoPro cameras do have some decent inbuild image stabilization technology as standard, at the time of writing, the technology has a long way to go before it is at the standard of a gimbal.

Additionally, the GoPro session mount is also included with your Feiyutech WG2 purchase as standard too so you can quickly and easily hot-swap between a regular GoPro action camera and the GoPro session if needed. Although it is not an officially supported feature of the WG2, it can also support a large number of the cheap GoPro alternatives on the market due to them using the same form factor and dimensions as the official GoPro range.

All in all, we feel that Feiyutech has done a decent job with the actual performance of the WG2 but the price tag and battery life let it down making the Evo SS the better deal. As we mentioned earlier in the article, if the WG2 gets a price reduction and can be purchased for less than $125 then it could be a decent action camera accessory to purchase, you can click here to check for the current prices of the gimbal. When it comes to wearable gimbals, there really is not much the brands can do for a control interface due to the fact that it will increase the size and weight of the gimbal and have a direct effect on the performance that it is able to offer you. That said though, the Feiyutech WG2 is a simple gimbal and we have no doubt that any action sport enthusiast who has zero experience with gimbals will easily be able to purchase it and get it working without running into any issues.

In our opinion, the one thing that Feiyutech tend to do better than the competition is their user interface systems for their gimbals and the WG2 is no different. On the flip side of this though, the lack of a control interface on most wearable gimbals does limit the customization offered to the user. Thankfully, as most people only use wearable gimbals for action sports this is not much of an issue and the default shipping setup of the WG2 will be able to meet the needs of the vast majority of people out there.

The Feiyutech smartphone app does have a number of issues with its connectivity at the time of writing and we doubt that this is going to change any time soon in all honesty. If you are able to get their app to sync with your Feiyutech WG2, it does offer some limited additional functionality but like we said above, the vast majority of people will be fine with the default config that the gimbal ships with.

If you have any other Feiyutech based gimbals, especially from their handheld range, then the app is a solid gimbal accessory to add to your collection. That said though, in all honesty, if the WG2 is the only Feiyutech gimbal in your collection or you only have gimbal stabilizers from the Feiyutech wearable range then the smartphone app can easily be avoided without issue. Now, no Feiyu Tech WG2 Review would be complete without covering the build quality of the gimbal as the vast majority of people who use wearable gimbals are going to be using them in action sports where there is a solid risk to them taking a few bumps and knocks. Thankfully, the build quality of the WG2 is absolutely excellent and Feiyutech have done a great job in this area making an extremely robust bit of kit that can take plenty of knocks during expected use and not break.

This is probably the only area where the Feiyutech WG2 pulls out ever so slightly against the competing gimbals but on the flip side of this though, we would rather have the better performance and lower price tag of the Evo SS as its build quality is very similar to the WG2. That said, other than the Evo, the WG2 is pretty much king of the wearable gimbals on the market right now when it comes to it how robust and lightweight the actual gimbal is.

When it comes to design, there really is not much to say in all honesty as the vast majority of modern wearable gimbals all use the exact same design due to it offering optimal performance and ease of use. Almost every wearable gimbal out there has a very similar design to the WG2 so it does not stand out from the competition much on the design front.

Question – Is the Feiyutech WG2 waterproof?

Answer – No, Feiyutech does not claim that the WG2 is waterproof either and although it can be used in light rain without issue, always be sure to dry it off as soon as possible.

Question – What size mounting thread does the gimbal use?

Answer – The WG2 uses a standard quarter-inch mounting thread making it easy to mount to a number of other popular accessories without issue.

Question – Can you use a smartphone with the Feiyutech WG2?

Answer – No, this wearable gimbal stabilizer has been specifically designed for use with action cameras that fir the standard GoPro form factor and dimensions.

Question – Can I use the Feiyutech WG2 while having my GoPro in its waterproof case?

Answer – No, this will increase the dimensions of the action camera above what the gimbals grip is able to support.

That brings our Feiyutech WG2 review to an end as we mentioned way back at the start of the article, in our opinion, you should go with the Evo SS instead of the WG2. Although the WG2 would be a solid option is it was cheaper, for its current price point in the market, the Evo SS absolutely blows it out of the water and is definatley the better option.