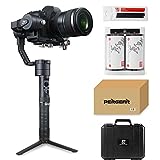 With both the Zhiyun Crane Plus and the Feiyutech AK2000 both having recently been released onto the market targeting the mirrorless camera market we have seen a ton of discussion about what gimbal is better than the other. Now, on paper, they both have their advantages and disadvantages and in all honesty, you could actually make that one paper, at last, the AK2000 can edge ahead of the Crane Plus and take the crown.

Due to this, we have decided to publish our Zhiyun Crane Plus v Feiyutech AK2000 article to compare the two gimbals and share our thoughts on what gimbal really takes the crown out of the two. Now, as we know that our readers time is valuable and many of you are often in a rush, we are going to give you a spoiler and tell that you in our opinion at least, the Zhiyun Crane Plus absolutely smashed the Feiyutech AK2000.

That said, if you are not in a rush and have some time to spare or you want to know why we feel this way then we have done a full breakdown below. Let’s start with a basic comparison table going over some of the key features of both of the gimbals.

Our Comments
A gimbal that initially had so much potential but the various faults on it are holding it back.
Price
Price not available
Buy Now
Buy on Amazon

Now, as we mentioned earlier, the AK2000 actually looks like it could have had a chance against the Crane Plus on paper due to its higher maximum load capacity and a similar price tag to the Crane Plus but when you dive deeper problems do start to show. Unfortunately, unless you do your research prior to purchasing the AK2000, you have a chance of ending up with a gimbal stabilizer with a fair few faults on it and in fairness, two of them should never have made it out of the testing phase of the gimbals development.

The main thing that we want to focus on is that the Feiyutech AK2000 has a number of common faults with the gimbal whereas the Zhiyun Crane Plus does not. Now we will be going into all of the faults excluding the smartphone problems below to explain why we feel that they hold the AK2000 back.

Although we are unable to know for sure, judging by what we have seen on a few forums, social media, and Reddit, around 20-30 percent of both the AK2000 gimbals and AK4000 gimbals from Feiyutech are having this same problem. Essentially, during use, the gimbal head starts to have issues with random vibrations that end up ruining your video footage.

To Feiyutechs credit, they have been very quick to address the issue as best they can and released the video above offering a fix for the issue. Now, the problem is that as the problem does not stem from a coding issue, it can’t be corrected by a firmware update. This means that you actually have to go out and look for the fix for a fault that in our opinion should never have made it out of the testing stages of not just the flagship gimbal of the Feiyutech mirrorless range but also the flagship gimbal of their DSLR range too!

Additionally, judging from comments that we have seen online, the fix in the video above does not correct the problem for all of the gimbals suffering from it with a small number seemingly always having the issue. Now, this may be down to user error and the owner of the gimbal is not implementing the fix in the video correctly but without access to the fault reports for the gimbal, we can’t know for sure.

Another thing that we have seen in a number of people commenting on how they are having to go through the process in the video multiple times, sometimes multiple times in the same day. If you are a professional videographer doing any type of paid client work this can potentially be a nightmare that you can easily avoid by just purchasing the Crane Plus instead of the AK2000.

That said, the majority of people who do have this issue with vibrations on their gimbal do seem to be able to fix it by going through the process in the video. In our opinion though, why should you have to take the risk when you are spending around the $300 mark on a new gimbal and there are options available without these issues.

Another fault that we are seeing commonly reported for the Feiyutech AK2000 and as demonstrated by the video above from an independent owner of the AK2000, when you have the gimbal set to smooth mode for timelapse capturing it will start to drift off to the left. Now in case you missed it in the video above, the setting for the timelapse shown is actually meant to be static, and the movement to the left is not intended and is due to the fault.

Multiple people have reported this fault to Feiyutech and at the time of writing this article, they have not publically commented on it. We are hoping that this is down to something in the coding on the gimbal and that it can be easily corrected via a firmware update but it could be another hardware fault.

If it is due to a hardware fault then this means another random process that you have to run your gimbal through every time you are wanting to use it in smooth mode for a timelapse. There is also a chance that Feiyutech may not be able to come up with a fix for the issue either meaning you are just stuck with having the problem. Again, the Crane Plus does not have this issue helping to push it even further ahead of the AK2000. Now this next fault may not be an issue for you if you are using a lighter camera rig with the Feiyutech AK2000 as it seems that the payload of the camera it is supporting has to be around or over 2 pounds of it to occur. As you can see in the image above, the rubber grip on the AK2000’s handle will slide up the handle during use with a camera payload that is heavy enough to create the required downward force.

As you can see at the top of the image above, the control panel for the gimbal is close to where the handle pushes up to and the rubber grip can actually slide enough to apply pressure to the tilt button on the control panel. This causes your gimbal to randomly tilt all the way back as it thinks that you are pressing its tilt button and it can cause a nightmare.

The rubber grip is actually pretty challenging to drag back down the handle of the gimbal too and it can not be done quickly or easily. This means that if you are at a professional gig with the Feiyutech AK2000 as your gimbal of choice, you may have to sneak off every now and then to get the handle of the gimbal back in working order. Not only does this waste time but it can also make you look unprofessional if you are using a heavy camera rig closer to the gimbals maximum load capacity that causes it to happen more often.

We have seen reports from people saying that they have tried to glue to handle in place or that they have simply just ended up cutting it off but neither seems to help much. From what we have seen, the glue eventually gives way and the problem happens again and if you just cut the grip off the handle of the gimbal is not very comfortable to hold during use.

You can probably guess what’s coming next, the Crane Plus does not have this issue and this just gives you even more of a reason to choose it over the Feiyutech AK2000!

We know that this article may seem like we are hating on Feiyutech and we just want to confirm that we aren’t. We actually love the Feiyutech G6 and feel that it is one of the best gimbals currently on the market for point and shoot cameras and we commonly recommend it to our readers. We just with that the AK2000 was built to the same standard as the G6 as it had so much potential.

Unfortunately though, in its current state, we feel that the Crane Plus blows the AK2000 out the water without even much of a challenge. We have mentioned in a few of our posts that we hope that Feiyutech can get a grip of the problems that we have covered in the article and rereleased an improved version of the AK2000 where they are all fixed.

If this does ever happen then we honestly feel like it could give the Crane Plus a run for its money but time will tell if this ever happens or not. We would just like to end by saying that we also have a dedicated Zhiyun Crane Plus review and a dedicated Feiyutech AK2000 review online that may be helpful if you still haven’t made your mind up on what gimbal you prefer. If you own a mirrorless camera setup then our article on the best gimbal for mirrorless cameras also features both the Crane Plus and the AK2000 along with three other popular gimbals.